Solar local and district heat can largely contribute to the energy revolution just like solar process heating and solar cooling. In order to meet this demand, we have developed the large surface collector K5 Giga with its elegant industry design. By default, it has five sections of 12.5 m². Depending on the collector field sizes, we can also offer smaller versions with four or three sections, at 10 m² or 7.5 m² respectively.
The K5 Giga+ has been developed for the use in higher temperature areas, of up to 120°C. In order to reach high degrees of efficiency even at these temperatures, the K5 Giga+ has a foil between the glass plate and the absorber as a convection brake. This is the first four-sided foil clamped into the collector that went into production worldwide! The K5 Giga, as well as the K5 Giga+, have a double-sided AR-coated glass plate for highest energy yields. 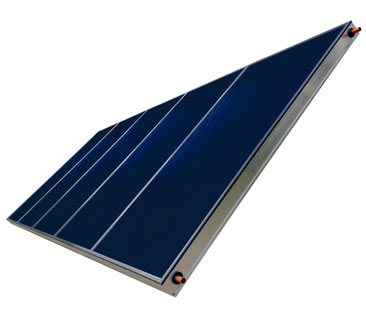 In case you are interested in turnkey ready units, we can rely on competent partners.
You can feel free to use the template available for download here in order to inform us about your planned project. We are looking forward to your request.

Our company is known in the heating market as a reliable, independent OEM for excellent solar thermal flat plate collectors and laser-welded full surface absorber in copper and aluminum. We deliver exclusively to OEM partners, Industrial customers and retailers who distribute thermal solar technology under their own name. As a result, KBB is not represented on the market with its own brand.

As an innovation- and quality-oriented company we are constantly further developing our production technologies. The machine park is continually modernised.
This way we are best prepared for the challenges of dynamically growing solar markets, and our OEM partners with us.

The innovations resulting from this especially help our OEM partners at reaching a strong market position. It is not for nothing that our products are in the solar systems of leading heating manufacturers and system providers in Germany, Europe and overseas.